Mullen and Dakota have been competing in dog agility for the past two and a half years. Once a week, they travel to either Dillsburg or Plainfield to practice for the actual trials. “I’ve always liked dogs and thought agility would be cool.” Mullen said.

The training costs $100 every six weeks, and it costs $25 per one run at a trial, which the duo competes in it about once a month. Mullen and Dakota have competed in three trials so far and Mullen won two first places in her last trial. “I like competing with my dog and it is a fun hobby.” Mullen said.

Dogs are put into different classes depending on their height. The dog gets measured and whatever measurement is the closest to the dog is the height class that they will be entered into. There are six height classes which are, 4”, 8”, 12”, 16”, 20” and 24”. The reason for the different height classes is for fairness, so dogs can go against other dogs their size to make it harder.

There are three different classes within the height classes that dogs can be entered into which include, standard, jumpers, and speed. Dakota and Mullen have won standard and jumpers, all in 20” category. “I train him by using treats and repetition.” Mullen said. The difference between all three classes is the different obstacles in them and how they must be run. Standard class use all the obstacles, the Jumper’s class just has jump tunnels and weaves, and the speed class normally uses all the obstacles but there are certain spots on the course that area restricted to where the trainer can go while the dog is running.

The most common breed of dog found in the trials is Golden Retrievers, but Mullen believes Border Collies are just as good. “I’ve always liked the breed, and they learn very easily.” Mullen said. However, Mullen admits that Dakota had some trouble learning the “teter”, also known as the seesaw. “Dakota doesn’t like obstacles moving while he’s on them” Mullen said. “It took him three weeks to get it down.” At every trial, there are around 100 to 300 dogs, depending on how many trainers bring their dogs.

The trainers of the dogs also have their own trainers. Mullen’s trainer is Kelly Armstrong, whose dog Driver (now deceased) won the 20” AKC national championship in 2011. Age group for trainers are normally 45 to 75 years old. Armstrong comes to her practices every week and sets up a course that Dakota and Mullen will run. Armstrong critiques what Mullen and Dakota do, so the two can get better and tells Mullen things they can work on at home to get better at basic stuff. Armstrong doesn’t go to the trials with Mullen, but does have three dogs that she trials with herself.

One of Mullen’s least favorite parts of the trials is the fact that she has to run her dog in front of everyone because it makes her nervous. The judge in the ring is constantly watching to see if the dog and or the owner make any mistakes and if the two mess up, the judge makes hand signals to the scribe that writes down what was messed up, which is usually something like a jump being taken the wrong way or the dog going through an off-course obstacle. Each dog and owner starts out of 100 points, and every mistake makes the score decline. 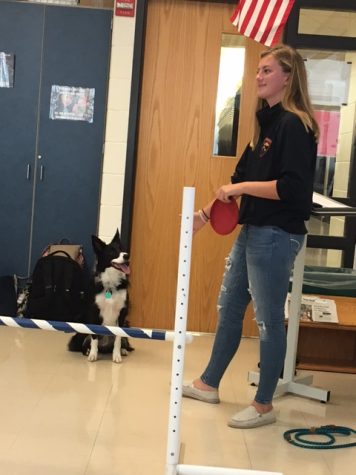 Despite the fact Mullen doesn’t entirely enjoy being the center of attention in the ring, she wouldn’t ever back down on a trial. “I love being able to compete with my dog and see how well we work together as a team,” she said.