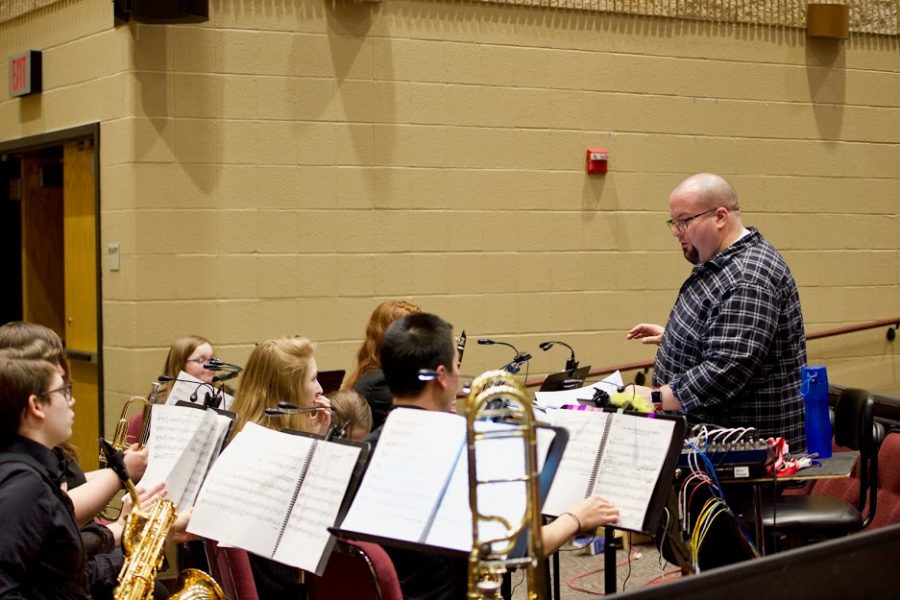 Adam Nobile conducting the pit for Seussical last year. He is the tech director this year.

“Annie Get Your Gun” has recently been announced as this year’s school musical, and auditions just finished. Students are getting ready with this year’s staff including Elise Nobile as the director, Adam Nobile as the tech director, Susan Travis as the pit director, and Edward Wilson vocal director. This year around 20 students tried out for the musical making this a sharp decline from last year’s numbers.

A survey was sent out to some of the students who participate in either the tech, cast or pit. These students have all been in the program for at least a year or two.  The survey included questions about the new staff, the musical change, and how the season will go.

Eleventh grade cast member, Bella Llaguno, has been in the program for four years. She said,  “I honestly feel great (about the new staff). It’s really sad that Mr. Feeser and Ms. Hagood left, but I think a lot will get done this year. Everything will be laid out accordingly and I’m very excited for some new faces!” Students will have to make adaptations with the new staff and their new ways of teaching. “I think it’s going to  be a lot more adapting to a quick and constant schedule. The new director has a lot lined up and probably won’t change anything. Another thing is the change of student director if there is one. Applying to student director is a little different this year. I’m excited to know who gets it! Another is the loss of a few actors,” Llaguno said.

The musical title was changed from the original choice as well, which might be confusing to some students.  Llaguno said, “It’s definitely due to the new director. But, another one is the rights weren’t bought on time from what I heard, and the lack of roles for anyone.” Explaining why she thinks the musical was changed. With the normal turnover of high school, the cast will definitely be different this year as well. “I know we are losing a few seniors in cast which is very sad, but we’re definitely gaining a few new faces which is amazing! I believe this year will be less laid back and more strict. I think we’ll be amazing, along with everyone else!”

Adam Nobile, is the new tech director this year. He went from directing pit, and now takes the place of Christina Hagood, the tech director from last year. Nobile does teach a class at school that is related to tech and helped in past years with the tech, especially the sound part.

Junior tech member, Hailee Stryker has been in the tech program for two years. “I think that this year will be very different from the past years. but I don’t think that will necessarily be a bad thing. I think the new staff will be able to bring new ideas.” Stryker said she feels that the musical chosen will be better than “Guys and Dolls.” When asked about the musical change she responded with, “I think they changed the musical because our musical department is growing and ‘Guys and Dolls’ would not have utilized our entire department.” Her area of expertise  is tech and she said said she hopes it will be a great year for that as well. “I hope it will be a great year! It’s definitely going to be different than last year with having a new stage manager. Ms. Hagood will be missed! But I think it will still be fun.” She hopes that this season is just as exciting as last year’s with “Seussical.” With adaptations she answered, “I think they should respectfully tell them how they are feeling. Some of the adults helping this year are new so they will be learning as we go through the season as well.” She really hopes that this season will be fun and she grows with the tech, and Nobile, the new tech director.

Gavin Hunt, an eleventh grader going in his third year of pit is really looking forward to this year’s pit season. His reaction to the new staff is, “At first I was a bit worried, but I think it will be interesting to see. They have all already put in a lot of effort and done new things, and I think they could have a positive influence on the musical and help make something great.” He is glad that the musical was changed to “Annie Get Your Gun”; “I had heard that the rights had never fully been acquired, though this was just a rumor and could very well be false. It also just might have been personal preference, since the people choosing the musical changed.” Hunt was also asked about his section individually, “In my opinion I have always felt the pit to be competent and believe that we will do a good job again this year. I also trust Ms. Travis and think she will do a great job as the new pit director, and it will be interesting to see how she does stuff differently.” Now about how this season will go, Hunt answered, “I think it might start a bit shaky, since it will likely be different than in the past, but I think as long as everyone involved puts in the effort we will be able to have a fun time and put on a good show.” Hunt said he  is very excited for this season of pit. He said he enjoys playing music and being with his friends in the program. It is his favorite activity every year, he always looks forward to it. “I think that people have to remember that this is a new group of people running things. I’m sure the people in charge know how things have worked in previous years and will try to keep it similar, but I think people need to accept that things may be different, and that this isn’t necessarily a bad thing.” One last thing Hunt said was, “I’m really looking forward to this upcoming musical season. So far the new people in charge have been putting in a lot of effort, and I hope that those returning will return the favor. I’m sure we can all work together to put on an amazing show this year, and I hope people enjoy it and that we all have a good time.”

Tyler Hunt a junior going into his fourth year of cast is seldom in the middle of the musical season. He says that he feels that in the past, staff for musical definitely had a particular style which Hunt says he feels is going to change quite a bit with the new staff. “Honestly it is nerve wracking knowing that this year is going to be a lot different, and I hope that everyone as a collective can make a fluid adjustment which will be necessary for a good end product, and an enjoyable experience leading up to the show.” Hunt said he thinks the adjustment is going to be hard for some of the students. In past years students have said to be very stressed during the musical season, due to having compact schedules; with school, work, other sports, and of course the musical itself. “But it is far from insurmountable, and I know the switch doesn’t necessarily have to be a big deal.”

The rehearsal schedule is going to be  intensive with an approximate 3 hour practice every night. There may be some resistance on so many changes happening. As one can see, multiple views are approached by the students about the musical and the changing staff. There will probably have to be a decent amount of adapting and patience with the students, as Nobile had said in a past article. The performances this year are Thursday April 2, at 7, Friday April 3, at 7, Saturday April 4, at 2 and 7. Hopefully, Nobile and all the other staff members get the patience and cooperation, and the students get the same in return; the production of “Annie Get Your Gun” is beginning.